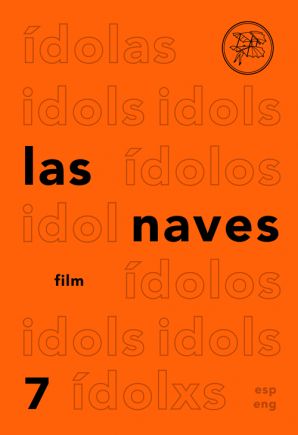 We start to think in this new issue because we are interested in the passion provoked by idols, the devo- tion, or even, in the words of Luis Ospina, author of the first text in this issue, the submissiveness. We think, in some way, we got filmmakers to talk about their idols, it is a form of reviewing the genealogy, and the beginnings of film. We also think that, in a displaced way, maybe there isn’t something more personal than confessing and sharing one’s childhood idols, or even those still in their adulthood. We also hope that idols, perhaps like love and passions, they are moving, changing, molding our experiences. Such as, the way of idols, the adoration and sometimes the fall and the deception, or sometimes the infallibility of the greats, developed into this issue as a way of reading the learning of a style, the progression of an esthetic, the traces and history of film’s sentimental education.

The path of our idols and their teachings reveal itself as a mystery. Even from childhood and politi- cally incorrect games of cowboys and Indians, like in Hollywood, the spark of our devotion to film can be marked. The factory of dreams and idols have unthinkable, thoughtless, definitive effects, even on the pedestal meant for deities. Such as, Ospina shares the young search (or the pursuit?) through the streets of Paris, until he came upon his god, Luis Buñuel. This same religious and sometimes blind tone that envelops idols is the one that the Argentine experimental filmmaker Narcisa Hirsch distrusts. However, Narcisa cannot forget when she fell in love, at 13 years old, with Vivian Leigh. She also remem- bers when she met experimental filmmaker Michael Snow, at a screening at the MOMA. Idols can be almost secret, and their power perhaps more lasting, the beginning of a small circle.

The German filmmaker Nicolas Wackerbarth, who not long ago released his film Casting (2017), and is one of those responsible for our admired publication, Revolver, fixates on John Cassavetes. His text is a de- tailed reflection of Cassavetes’s work, and also a defense of his aesthetic and of his formal procedures. In other cases, the figure of idols has the form of a review and a discovery. In the young North American film- maker Ted Fendt, one can the see the task of recalling a lesser known figure, Jessie Maple, the first African-American indie filmmaker. Even though it is difficult to access Maple’s (and Fendt’s) movies, in some way, this text is also the relation of access to the secretive, 17 and something from that path of discovery is what happens with idols, we make them our own. Along the same line, another of Revolver’s German collaborators, our dear Franz Müller, reflects on how the work of an artist is in part comparable to the work of weavers, selecting which fabrics and colors to use, a bit through the cutout that the formation and discarding give us, even those smaller works, until they’ve come to form a look and an aesthetic. For Franz, idols are in part less sacred and more human, something more pop and handcrafted somehow. Music, Japanese film, the humor of North American comedians have worth, everything coming to form part of our aesthetic tools. In a similar tone, Saskia Walker, also German and from Revolver, distrusts the worshipping of the masters, despite having been educated by reading Cahiers du Cinéma. She suggests learning from idols, with a simple and intimate question: How did you do it?

In the case of Dane Kolmjer’s text, director of All the Cities of the North (2016, Bosnia), the relationship with idols takes the form of a poetic portrait of Chantal Akerman, a kind of learning the perspective. Chantal is a “sister”, a chosen family, that teaches how to see and record bodies. The semblance, here more personal, and even more anecdotal but at the same time reflec- tive, is also one of the tones that the collaboration of Galician filmmaker Xurxo Chirro takes, who is defined as the “shadow of Oliveira.” Chirro shares the relationship with his centenarian idol. Just as the career of Manoel de Oliveira passed through all the stages of modern film, in some way Xurxo Chirro shares with us all the stages of his relationship with his idol, even up until the moment of meeting him personally. We take advantage of the possibility of telling with this text about Oliveira, in order to bring and publish in Spanish two texts that are not exactly thought of in regards to idols, but seemed to us valuable to publish in Spanish and English, and that somehow they are a kind of dialogue between idols. In this way, we gain a somewhat ambiguous review from João César Mon- teiro, about a film by Manoel de Oliveira, and at the same time, a reflection from Manoel de Oliveira about Monteiro himself. These are two ways of writing and of thinking about film, two very personal selections and perspectives on modern film.

Finally, in a text closer in time, Santiago Mitre, drawing from a conversation, allows himself to think to what extent, in the creative process of his movies, there are references and even quotes from the first film idols, from Mastroianni to Al Pacino himself.

But more than this, Mitre insists in the luxury of having started making films around his teachers,
the directors of New Argentine Cinema, very close to them, in a moment where everything seemed pos- sible. Further back in time, we include here one more recovered text, unpublished in English and difficult

to find, from Spanish filmmaker, theatre director and actor, Fernando Fernán Gómez (1921-2007). Director of more than 20 films and actor of hundreds of movies, Fernán Gómez tells us the story of two classic film idols, Roberto Rossellini and Ingrid Bergman. The title of his text, “Para que nos quieran más” (“So That We Will Be More Loved”), is a provocation to artists’ duty, but maybe, he says, it should extend to the hid- den motives behind everything we do.

Perhaps nowadays it is an anachronism to think of idols. Although maybe, we continue doing things so that they’ll love us more. Perhaps it is no longer possible to think of idols, of film, and further, of politics. The passion that encompasses the path of idols, although sometimes blind and too complacent, can sometimes shake moments of generalized boredom and even the lack of controversies. So, for this reason, the closing of this issue is something more political than those of our other books. We give the final word, and more than this, the final image, to North American filmmaker John Gianvito.